Journey of a lifetime leads to $1M planned gift 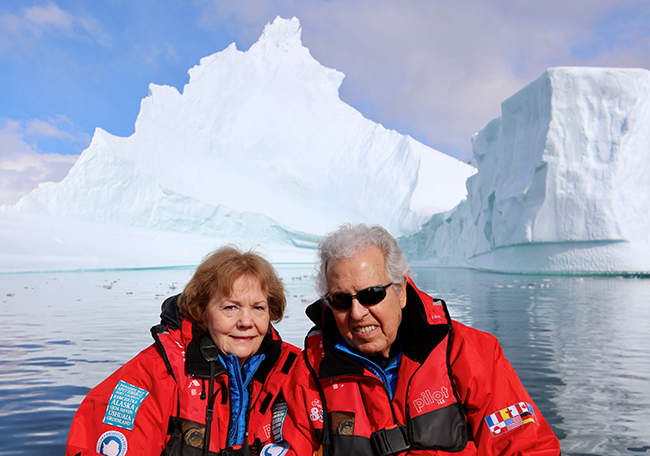 Vinny Martucci and Arlene Petty have traveled around the world – seven continents and 48 states, to be exact – experiencing the wonder, discoveries, and challenges touring the world offers. Of all their travels, perhaps their longest, most challenging – and most rewarding – was Vinny’s journey through kidney transplantation.

Professionally, Vinny was a communications engineer and Arlene owned her own professional liability insurance business. When not working, the couple spent time traveling, golfing and kayaking. Vinny was 58 when he learned he had polycystic kidney disease (PKD), an inherited disorder in which clusters of cysts develop primarily within the kidneys, causing them to enlarge and lose function over time.

In 2014, Vinny was preparing for a transplant when he was diagnosed with an aggressive and invasive prostate cancer. Radiation was the recommended treatment, but that could compromise the abdominal surgery Vinny would need for a future kidney transplant. He was referred to MUSC Health in Charleston where he had a minimally invasive prostate cancer surgery called a perineal prostatectomy.

Though Vinny was now a cancer survivor, his kidneys were still failing. Most transplant centers require at least a two-year waiting period after a cancer diagnosis. By then, Vinny would have been 74 and less likely to be considered for a transplant because of his age.

Based on Vinny’s overall good health and active lifestyle, urologic oncologist Thomas Keane, M.D., advocated for Vinny to be considered. The MUSC transplant team, a national leader in solid organ transplantation, agreed he was a good candidate.

Now he needed a living donor. Although Vinny’s sister was considered a “perfect match,” she couldn’t donate because she, too, had a prior cancer diagnosis. Many family and friends offered to be a donor, but for a variety of health-related reasons, no one was able to donate. “It was like being on a roller coaster,” said Arlene. “We didn’t know what to do so I put out an email to all of our friends.”

She wrote: “I never thought I would have to ask, but I can’t give Vinny a kidney, because I’m a breast cancer survivor. I can’t help him, but I can ask for you to consider helping him. We have run out of options.

"Is anyone willing to give Vinny a kidney?” she asked.

“Chris is a remarkable person,” said Vinny. “We couldn’t believe he was willing to give me his kidney – he was literally willing to give me the gift of life.” Vinny and Arlene had known Chris and his wife, Becky, for about two years, but more as casual friends. “They are very special people, taking emotionally challenging foster children into their homes,” explained Vinny. “Plus, he gives me a kidney. I mean, it's just amazing that there could be people in the world that are that unselfish. People who just give away their life for you, even though they don't know you that well.”

As Chris explains it, there was never a question he would donate. “I think for me I never saw it as a big deal. It always felt to me like when I donate blood. It's something I can do and doesn't take anything away from my quality of life. It doesn't hurt me, doesn't cost me anything. But I can help somebody.”

Vinny and Arlene arranged for Chris and his family to travel to Charleston. They covered the cost for Becky and one of their sons to be in Charleston for the surgery, paid for a week’s overnight care for their foster children, covered Chris’s wages at work through his eight weeks of disability, and took care of hotels, meals and every incidental.

After Vinny recuperated, the couple started volunteering with nonprofit Staying Connected near their home in Bluffton, providing rides to medical appointments and grocery stores to those in need. It was there that they met a woman who was on dialysis while she waited for a transplant. They watched her decline and saw the financial barriers she faced to getting well. Vinny and Arlene realized how lucky they were and decided they needed to give back in a meaningful way.

The couple learned that South Carolinians suffer a higher rate of end-stage renal disease than other areas of the country, which disproportionately affects the African American population. Sixty-six percent of MUSC’s kidney transplant recipients are African American, with nearly two-thirds of transplant recipients having a household income of less than $30,000 per year.

In 2020, Vinny and Arlene furthered their impact through a planned gift to MUSC: They made a bequest of $1 million from their estate to the MUSC Living Donor Institute. The gift will serve as a match to a $1.5 million gift from the Patterson Barclay Memorial Foundation in memory of Fred Allen, who also suffered with PKD. “It seemed the perfect way to give back in a personal way, to ease some of the burdens,” said Arlene.