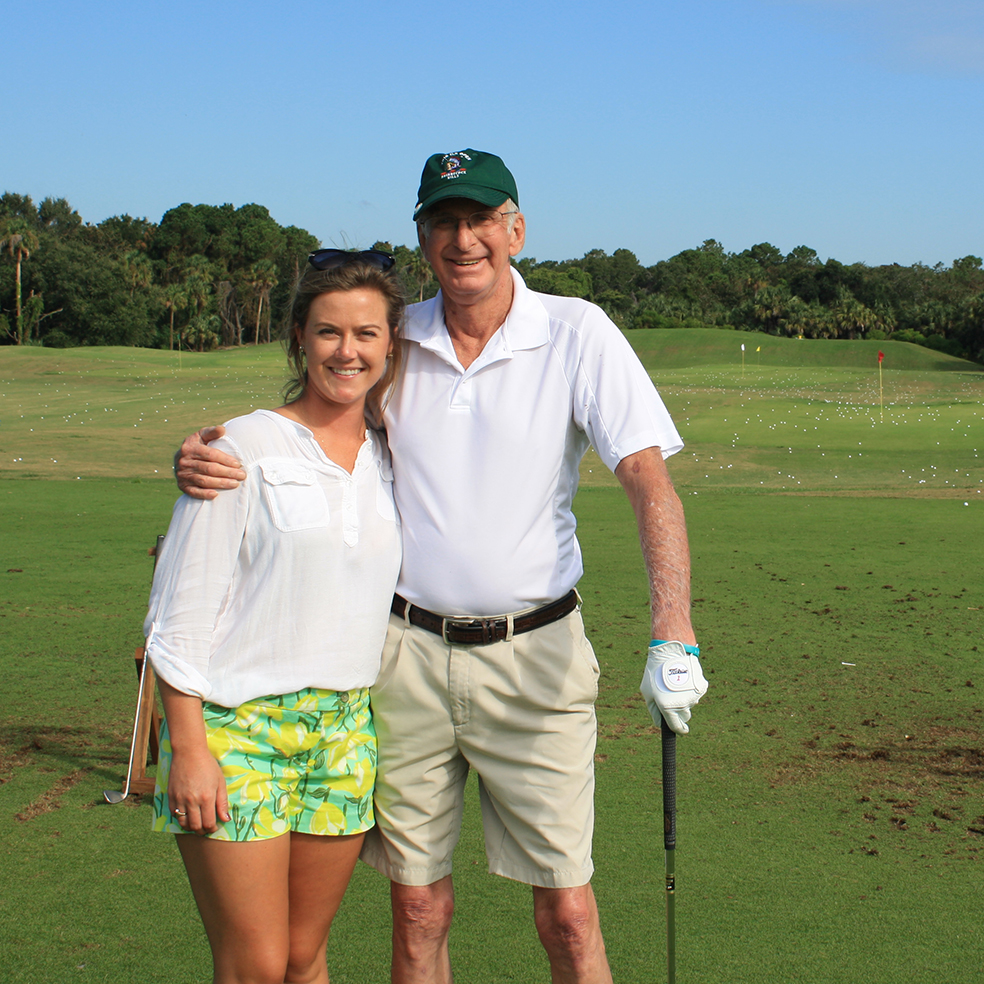 A shared struggle with cancer leads to hope for others

We sat in an exam room at Hollings Cancer Center, no one sure what to say. I was only 19, diagnosed with ovarian cancer during the summer between my freshman and sophomore years of college.

My parents and I waited, with clammy hands and dry throats, to talk with my oncologist about surgery and treatment, about what happens next. My parents saw me looking at a poster on the wall of a woman in her bathing suit swimming laps in a pool. "Jill Bradley, stage IIIC ovarian cancer survivor and clinical trial participant," it said.

She had the same diagnosis as you, my mom pointed out. I studied the poster and the strength this woman projected. Seeing her image somehow made the waiting seem more manageable, the conversations that followed more tolerable and the treatments thereafter more bearable. She overcame this disease. So could I.

Three years later I would meet that woman's husband, Joe Bradley, at Hollings Cancer Center's annual golf tournament on Kiawah Island, while working as a special events intern and helping to check in golfers. A colleague introduced us, and we became fast friends with a shared passion to cure cancer.

As Joe likes to say, "Cancer is a six-letter word that I find more abhorrent than most four-letter words."

I've gotten to know him better over the past two years. After meeting him in 2015, I'd check in with him now and then. And he was high on my list of calls when I landed a full-time job working in fundraising as a gift administrator at MUSC.

Most recently, I had the honor of helping Joe make a planned gift from his estate to Hollings Cancer Center in honor of Jill. His contribution will support an endowed chair named for her oncologist, Dr. William T. Creasman, and help to recruit researcher-clinicians dedicated to treating and curing gynecologic cancers. With each conversation or visit, I learned more about Joe - and more about Jill.

The Bradleys met in Saint Louis and married in 1971. They traveled the country, as Joe pursued business ventures ranging from footwear sales to landscaping and eventually real estate.

Jill took an active role in their two daughters' education, volunteering at their schools, teaching swim classes and introducing the girls to horseback riding. "I've seen her muck out stalls," Joe remembered, "and I've seen her presented to society at a debutante ball."

With Joe's career winding down and their two daughters married, the Bradleys retired to Hilton Head Island in 2005. The next year, during an unrelated surgery, a doctor discovered Jill's ovarian cancer.

She received her diagnosis in October of 2006 and underwent surgery that December. When the Bradleys gathered both daughters and their husbands for Christmas that year, Jill told them nonchalantly over baking sheets lined with cookie dough, "I have a little bit of cancer."

Joe suggested that they travel to MD Anderson Cancer Center in Houston or Memorial Sloan Kettering Cancer Center in New York. But Jill did some research and wanted to undergo treatment at Hollings.

She started chemotherapy in January of 2007 and insisted on making the 200-mile round trip to MUSC by herself. If Joe knew one thing about his wife, he knew to respect her independence. Jill would zip up and down Highway 17 in her red BMW Z3 and refused to let anyone pity her.

She recovered enough to swim 4,000 yards per day, pick back up on her needlepoint projects and keep her oven hot every holiday season, baking batch after batch of her famous chocolate chip cookies for dozens of employees at Hollings Cancer Center.

She reluctantly posed for the clinical trial poster that I saw in my exam room, convinced to participate only by the promise that her story could inspire another patient. When I met with Joe to discuss his recent estate gift to Hollings Cancer Center, I revealed his late wife's lasting impression on me.

"I know I didn't know you at the time, and never would I think that I'd meet you," I told him. "But Jill was really my first inspiration."

Not long after she posed for the poster, Jill's cancer returned, as it often does with our shared diagnosis. She died in 2013.

Up until her final days, she continued swimming, driving herself to appointments and baking cookies. Even at 79 pounds, she never gave up.

When I met Joe two years after Jill's death, I listened as he spoke of his beloved wife. I realized only later that I already knew part of her story. As I told him about our connection, he took a deep breath and wiped his eyes.

Joe feels the same way about his gift in Jill's memory. "I don't know which dollar is going to kill cancer," he said. "But I give to Hollings, because I want to help to defeat cancer and honor my wife's life, which was cut short. And because of the passion and compassion we experienced there."