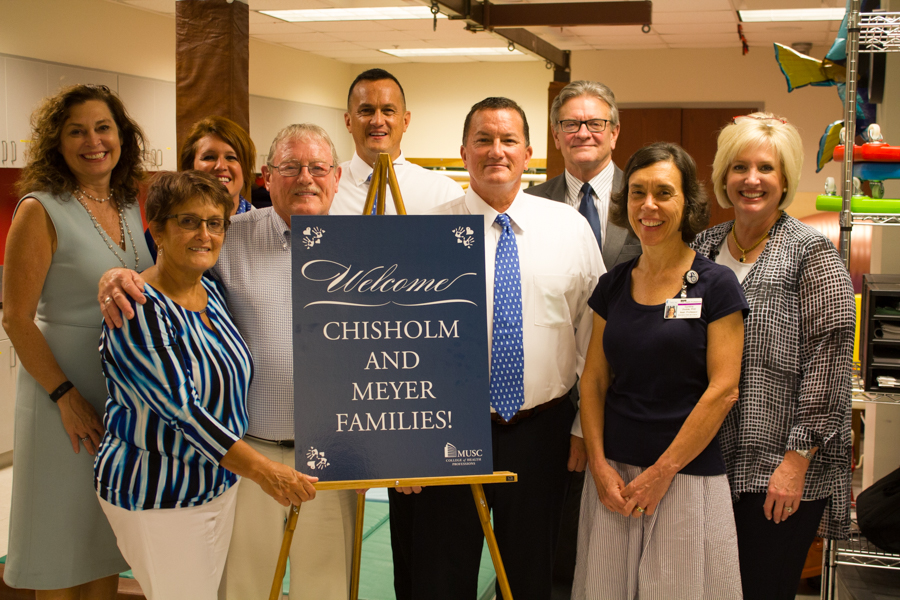 A bond made stronger

Cami, Rob and Rodny. They share the same genes, the same birthday month and now, the same legacy.

Sadly, another thing these siblings have in common is that their first encounter with the Medical University of South Carolina was marked by tragedy.

On October 20, 2002, Cami gave birth to her first child, Camden Scott Meyer. "I remember the first photos of Camden. What a handsome baby, with beautiful brown hair and a cute little smile," Rodny reflects. Devastatingly, Camden passed away three days later. Rob and Rodny immediately drove 15 hours from Michigan to be with their sister.

After some time, The Camden Scott Meyer Pediatric Lab fund was created to build a facility in the College of Health Professions that promotes pediatric rehabilitation services and research, funds occupational and physical therapy programs and supports Camp Hand to Hands for children with hemiplegia. "We needed a way to take the sadness and move forward," explains Cami.

In the beginning, family and friends came together to build up the fund. Through their parent's annual garage sale and continued support from the community, the fund has grown substantially over the years. However, the most remarkable gifts have been made recently thanks to a little sibling rivalry and a whole lot of love. "We've always had some sibling competition. For example, Cami went for her masters, so now both Rod and I are in graduate school," Rob laughs.

This time around, Rob and Rodny beat Cami to the punch when they left planned gifts to Camden's fund. "The most heartwarming thing was I didn't know they were doing it. After they told me about their planned gifts, I started considering leaving one too," Cami shares.

Today, almost 14 years after Camden's passing, all three siblings have made a planned gift to support The Camden Scott Meyer Pediatric Lab fund. For the trio, planned giving allows them to make a larger impact in the future. "Most people may not have the finances to help currently, but it is easy to divvy up your funds that are set aside for the future knowing you can help more later on," says Rob. Their commitments have sealed their legacies and the legacy of Camden at MUSC.

While not everyone who walks by the engraved plaque outside of the pediatric lab will know Camden's story, their lives and the lives of children will be changed because of him. "And that's what matters. That's what we're doing this for," Cami affirms.

Rob, Cami and Rodny are examples that the greatest gift we have is family. From tremendous loss, emerged a vision that will provide endless impact and inspiration to anyone who walks through the doors of the College of Health Professions. And for that, generations to come will be forever grateful.