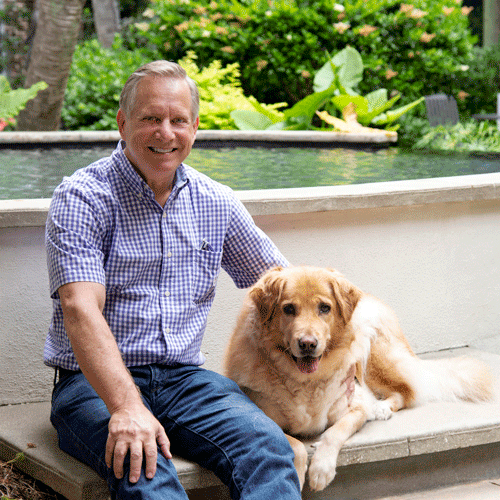 Anybody can make a difference

As a child, Matt Prisby watched his father support the vendors selling apples and pencils on the sidewalk, despite their family’s own financial circumstances. As he grew older, he began to think about his father’s example and how he could give back with his own money.

His wife, Sheryl, a dental graduate of the Medical University of South Carolina, shared his passion for giving back. The couple also shared a love of golden retrievers. They rescued several and directed all of their philanthropic giving towards animals. “They don’t really have anybody to speak for them,” Prisby said. But when Sheryl died of cervical cancer in 2014, Prisby knew he needed to honor his wife of 26 years in an impactful way.

Prisby established the Sheryl Sirisky Prisby Scholarship in Gynecological Oncology, which is the first scholarship dedicated exclusively to research of women’s cancers at MUSC Hollings Cancer Center. This scholarship was made possible by Prisby, who made a planned gift to MUSC through his will. Prisby’s gift creates a legacy for Sheryl and supports research dedicated to finding new ways to prevent, treat, and potentially cure gynecological cancers.

“One hundred years from now, I hope I was able to show people that anybody can make a difference,” Prisby said. He wants to encourage more people to give, no matter the amount, and to share their stories about what or who inspired them. “You really never know what’s going to resonate with people and I think there needs to be more stories out there,” he said.