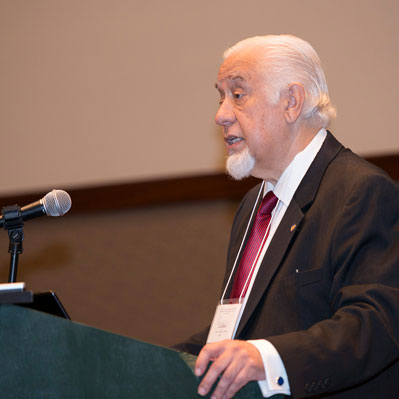 His skill in patient care became legendary the day a 1-year-old girl in clinic screamed and screamed, unyielding to anyone's efforts to soothe her.

Dr. Carlos Salinas walked into the room, held the baby's hands and looked into her eyes, talking in a playful voice and telling her not to worry. In the silence that followed, his exasperated colleagues stared at one another in amazement.

His storied career took Dr. Salinas from dental school in Chile to genetics research in the United States and onto teaching at the MUSC James B. Edwards College of Dental Medicine, where he became the most vocal advocate for special-care dentistry. Dr. Salinas recognized the need for facilities and instruction to treat patients with physical or intellectual disabilities, patients who often require more time, patience and skill.

He created the state's first directory of special-needs providers, an invaluable resource to caregivers statewide. He joined a planning committee for the new dental school, speaking up at every turn to ensure a highly visible and easily accessed space to treat special-needs patients and train residents in providing the best care for them. And he established a continuing education seminar to invite dentists from across South Carolina each year to brush up on these unique and critical skills.

Dr. Salinas was diagnosed with pancreatic cancer in March of 2013. When he recognized the disease's progression, Dr. Salinas made plans to carry his work forward by charging colleagues and friends with tasks to ensure that annual special-needs dentistry training would extend beyond his own lifetime. Dr. Salinas died on Jan. 14, 2015.

This month professionals from around the state will convene for the 19 th annual The Dr. Carlos F. Salinas Dental Program for the Diagnosis and Treatment of Individuals with Special Health Care Needs, thanks to his colleagues' commitment to his legacy and gifts made in his honor. His wife, Dr. Maria Cordova, recently made a planned gift from her estate to see that the course continues for generations to come.

"I saw him work so hard that I really didn't want to see that lost," Dr. Cordova said. "Now there will always be the funds to keep it going."

She and Dr. Salinas met after high school while checking their entrance exam scores to begin dental school. She heard a young man standing beside her complain that he had tied with someone whose name was listed first alphabetically - hers.

They became friends that day and began dating a year later. They married as soon as they graduated at age 20 and, within months, they were expecting their first child.

They intended to stay in the United States only through their fellowships, but Chilean forces staged a military coup that made it unsafe for their family to return home. MUSC recruited them and, in 1974, they found a new home in Charleston.

Dr. Salinas and Dr. Cordova both enrolled in an upward mobility program to earn their American dental degrees while working. When their entrance exam scores arrived in the mail, they laughed; once again, they scored the same.

With full-time research positions and three school-age children at home, they tackled their coursework together. Dr. Salinas went on to become a professor of pediatric dentistry and orthodontics and served as director of the MUSC craniofacial abnormalities and cleft palate team. Dr. Cordova ran a family dentistry practice just blocks away on Wentworth Street until 2010.

Looking back on that time, Dr. Cordova said, "It was like climbing a mountain. You may be very tired, but you're going to get to the top."

She and her husband became fixtures of their adopted community, not only medically but socially. Together they founded Circulo Hispanoamericano de Charleston, an organization dedicated to promoting and preserving Hispanic heritage for nearly 30 years.

Dr. Ted McGill, a colleague who took over planning Dr. Salinas' special-needs course, remembered his friend's commitment to the class until his final days.

"He was in middle of treatments and knew that they weren't going to work," Dr. McGill said. "A week or so before he passed, he asked if I would take over. You couldn't say no to Dr. Salinas."

"It just takes a long time to treat and treat correctly," Dr. McGill said. "You have to have a special heart for it, and Dr. Salinas was committed to getting more people interested in it."

An estimated 150 dentists gather in Charleston each year for the continuing education course named in Dr. Salinas' honor.